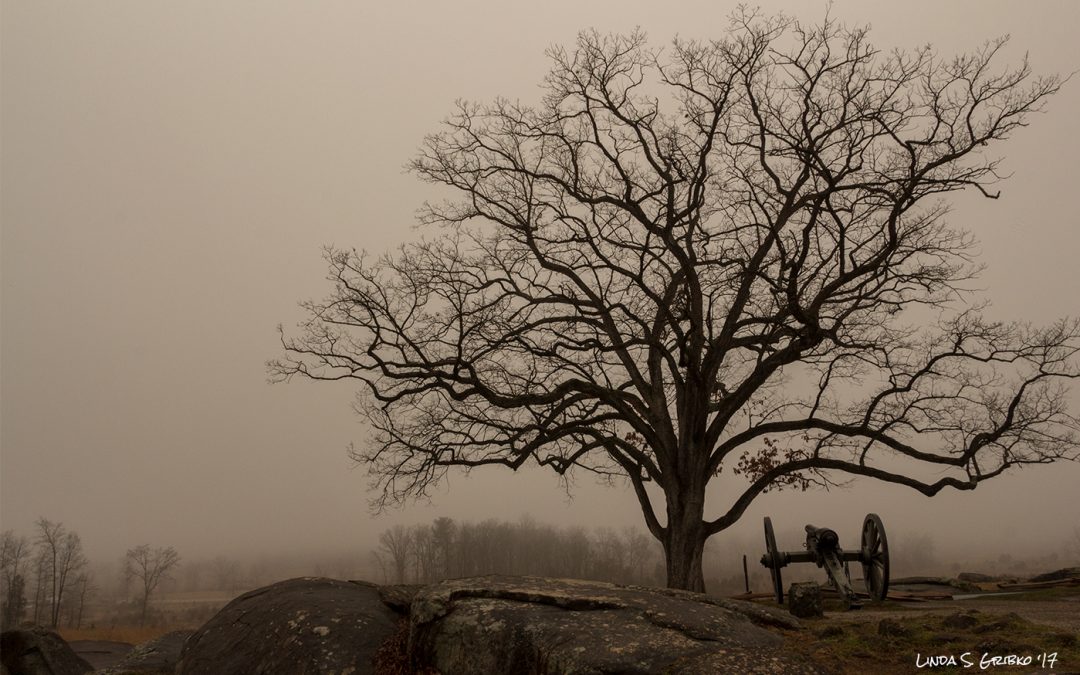 The Photo. I shot this photo of the artillery position atop Devil’s Den at Gettysburg National Battlefield on a foggy Monday. It was right before noon on March 27, 2017, to be exact. I wasn’t really planning on spending time around Devil’s Den on this particular trip to Gettysburg—my mission involved capturing additional views of the Peach Orchard for my next writing project. However, the sky promised to be milky white with dense cloud cover all weekend (the worst possible conditions for landscape photography), so I’d picked up a copy of a Devil’s Den walking tour guidebook from the visitors center when I’d arrived and had stowed it in my truck.

After two days of struggling to compose attractive photos that didn’t include too much sky, I awoke on Monday morning to heavy fog reaching up from the valley floor to merge with the overcast sky. The world was obscured by mists. I took the hint, grabbed my guidebook, and headed out to explore Devil’s Den. The tour route took me from the small parking lot at the base of the jumble of boulders that is Devil’s Den, up a muddy staircase to the top of the outcropping. There I found a massive, white oak tree anchoring the 4th New York Light Artillery memorial—a line of four cannons and a figurative monument topped by a bronze statue of an artilleryman. I gathered the leftmost cannon into my shot and included the full glory of the tree spread out over the milky sky. The resulting photo is my best capture of the entire weekend. It’s moody and dense with mist, suggesting the smoke that filled the valley on July 2, 1863.

For those at least somewhat familiar with the battlefield, Little Round Top was directly behind me as I snapped the picture. Texans, Arkansans, and Georgians attacked up the slope in front of the tree and eventually captured the artillery position. If you squint, can you yet see soldiers approaching through the haze? 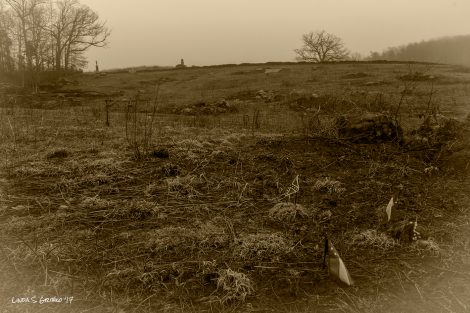 An informal memorial along the 1st Texas approach up the toe of Houck’s Ridge.

A Ramble Around the Base of the Ridge. I don’t have a family connection to Devil’s Den—none of my Union ancestors fought among the massive boulders here or along Houck’s Ridge, which stretches to the right of the artillery position. My lack of connection and the usual crowds at this site had discouraged me from exploring the area and even though I’d been on a tour through here in 2016, I wasn’t able to sort out the infamous landmarks of the area. Bloody Run, The Slaughter Pen, The Valley of Death, The Triangular Field…all swirled in confusion around the big rocks. My trusty guidebook took care of all that. From the artillery position, I was led to my right in a big loop that took me out along Houck’s Ridge and then back around to the base of Devil’s Den. I found myself looking up at the white oak tree and the 4th New York Memorial from the Confederate position. A farmer’s field bounded by a triangular stone fence covered the lower slope in front of me. I walked up into The Triangular Field to take a picture of an informal memorial to the 1st Texas Infantry, which made this approach during battle. As the Texans worked their way up this slope, the cannons in front of them became ineffective, as they could not be adjusted to fire down at such a steep angle. When the Texans had advanced about halfway up, the 124th New York Infantry, which was providing support to the artillery position, swept down in a surprise charge that threw their attackers back. Things didn’t look promising for the Texans at that point, but reinforcements arrived in the form of the 2nd and 20th Georgia Infantry Regiments, which swept around them on the right and helped overrun the Union position. This second photo shows the approach from the Georgians’ position. 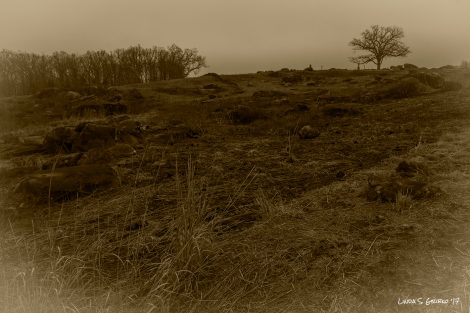 The Georgians’ approach up the toe of Houck’s Ridge.

Now, interestingly, the 1st Texas and the 2nd/20th Georgia all played roles in the Antietam story that I share in Giving Voice to Dawn. My character, Bill, was a fictional lieutenant in the 1st Texas, which fought in the Bloody Cornfield. The two small Georgia regiments were the same units that kept the Union boys, including my ancestors, pinned down for hours at Burnside Bridge. So, I did have a connection to this place, if only literary. 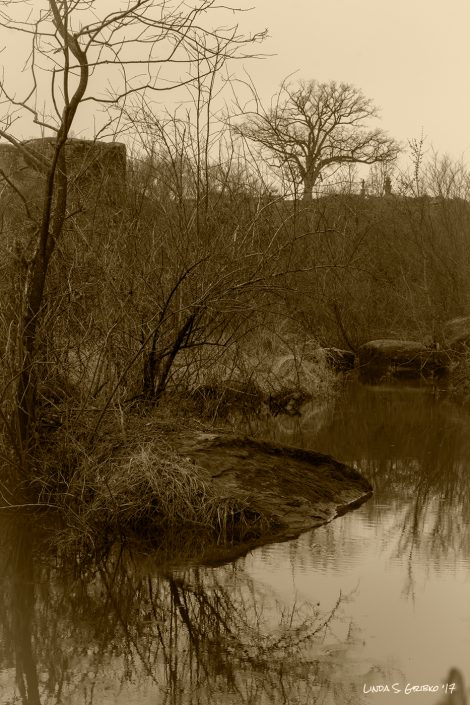 Plum Run with the toe of Houck’s Ridge in the background.

I continued around the toe of the ridge, following the old electric trolley route, until I reached Plum Run. My guidebook suggested the rocks spanning the small creek sometimes referred to as Bloody Run could be slippery. They were and I decided to sacrifice my shoes and the last twelve inches of my jeans as I stepped into the cold water to wade across, rather than falling in. Here’s Plum Run with some nice reflections. The big white oak is still clearly visible above and, if you look carefully, you’ll see that it had begun to rain. The photo part of this excursion was about to end. 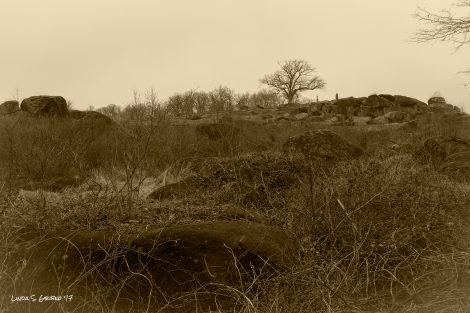 The view from the edge of the woods as I entered The Slaughter Pen. The top of Devil’s Den is now visible to the right.

I was now working my way around the toe of the ridge and the boulders of Devil’s Den were about to come back into site below the oak tree. I walked through a thin patch of woods here and took one last photo to document my position. Devil’s Den is appearing to the right here. I went just a bit farther and stepped out of the woods. I had entered The Slaughter Pen. While the 1st Texas was busy trying to battle its way up through The Triangular Field, the 44th and 48th Alabama Infantry Regiments were fighting in this wet area on either side of Plum Run. They were vulnerable to fire from their front (the 4th Maine Infantry was deployed in the ravine between Devil’s Den and Little Round Top and was backed up by the remaining two cannons of the 4th New York Battery), from Houck’s Ridge, and from forces gathering on Little Round Top. This patch of land did feel exposed and hemmed in, regardless of the jumble of smaller boulders that could have provided a bit of cover—I understood immediately why it had become a slaughter pen. 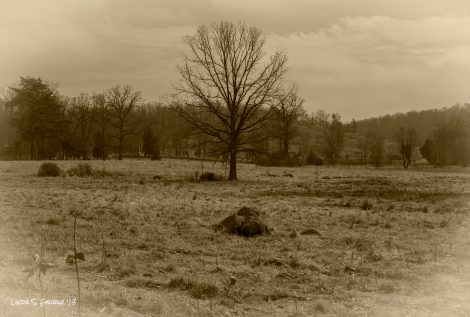 The Valley of Death from the north (Union position) near the Trostle Farm. Union reinforcements moved down this valley to back up the 4th Maine and push the Confederates back.

The Outcome. Three of the four cannons stationed on the prominence had to be abandoned and were captured by the Confederates. My guidebook shared that the Texans were given credit for the capture, despite a claim by the Georgians. Union reinforcements were sent south through the Valley of Death, the flat between Houck’s Ridge and Little Round Top that ends at The Slaughter Pen. The photo to the left shows The Valley of Death from the north with Little Round Top in the center of the frame and Houck’s Ridge out of the frame to the right. The 40th New York and 6th New Jersey Infantry Regiments made this approach to take on the Alabamians and Georgians. They were able to push the Confederates out of the valley and back into the woods and boulders. After prolonged fighting along the length of Houck’s Ridge, Union forces retired toward Little Round Top and Confederate artillery positions were established atop Houck’s Ridge. The fight continued from here for control of Little Round Top and my hike had ended with wet shoes and a handful of misty photos that help tell the story.