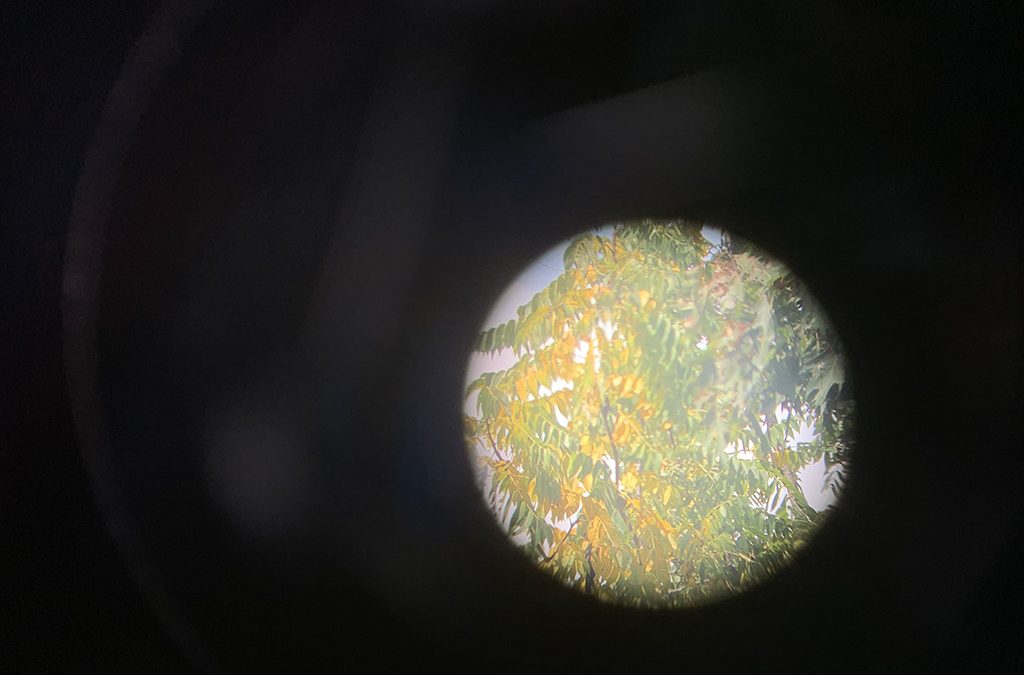 Black walnut (Juglans nigra) is my nemesis. This ecologically useful producer of high-fat, delectable squirrel food also produces fabulously expensive yellowish brown wood and veneer used in the fabrication of fabulously expensive board room tables. Unfortunately, the trees at the edge of my property have no economic value. They’re open-grown and rangey without clear butt logs that might be harvested for fancy veneer. My trees do, however, produce plenty of big, stinky walnuts, which the many neighborhood squirrels bury everywhere. Which, of course, means plenty of black walnut seedlings each summer in my garden beds, meadow, fallow areas, brush piles, compost heap, driveway, flower pots, and etc, etc, etc.

Black walnut seedlings have to be removed as quickly as possible wherever they emerge, because every part of a black walnut tree produces juglone, a toxic substance designed to selectively weaken and/or outright kill other plants. Black walnuts do most of their damage by exuding juglone from their roots into surrounding soil. But, juglone can also rain down from above, carried from a murderous tree’s leaves by a summer storm. Fallen autumn leaves and twigs also contain juglone, as do black walnut wood chips.

Although you’ll find anecdotal accounts pooh-poohing the impact of juglone on garden plants, let me tell you that a nearby black walnut tree can absolutely impact vegetable crops. This is a thing I know for sure because, until its impacts became undeniable, I naively ignored the fourty-foot tall black walnut tree growing below my vegetable garden. I have a forestry degree, so definitely knew about juglone but so many online pundits were dismissive of its impacts and, having bypassed physics class, I really didn’t believe all that much juglone could possibly travel uphill to my garden. Hahahahahahaha! Dumb bunny.

I share here in question and answer format my experience growing near a black walnut tree and how I’ve battled back.

What Crops are Impacted by Black Walnut Trees?

The many lists you can find online regarding garden plants impacted by black walnut trees mostly replicate the advice given by Michigan State University Extention to avoid planting asparagus, cabbage, eggplant, peas, peppers, potatoes, rhubarb and tomatoes near a black walnut tree. Unfortunately, I spent many years in black walnut denial, so planted all these crops, with the exception of potatoes, in my Black Walnut Kill Zone. I can say without reservation, therefore, that this list is a good list.

Here’s the meat of my experience:

Tomatoes. Juglone will absolutely zap your tomatoes dead. One day they’ll be three feet tall and happily setting fruit and the next they’ll be completely wilted, incapable of recovery. It was the zapping of all my Bush Early Girls this summer that finally woke me from my trance of black walnut denial. 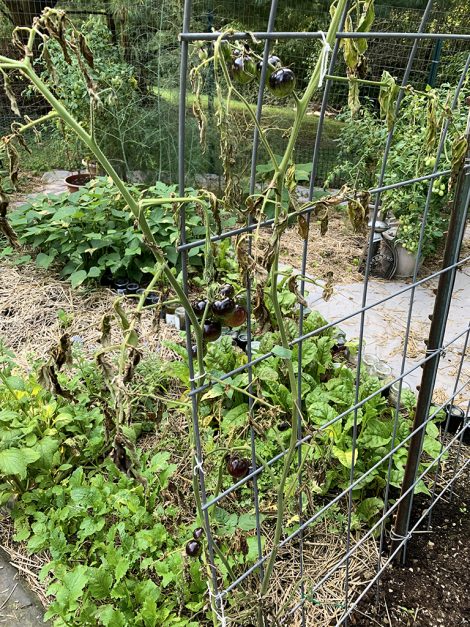 Cabbages. Juglone will stunt, although not kill outright, cabbages. I also had no luck with kohlrabi within my Black Walnut Kill Zone, so am not inclined to try additional brassicas there.

Peas. Juglone will prevent most pea seeds from germinating and/or kills the sprouts before they emerge. Note I said most. Peas, in my garden, are variety-specific. Well within the kill zone, as close to the bottom of the garden as you go without being on the wrong side of the fence, gorgeous crops of Green Beauty snow peas grow. Shelling peas, however, are a uniform “no” anywhere in The Zone, as are sugar snaps, which germinate for me but fail to thrive. 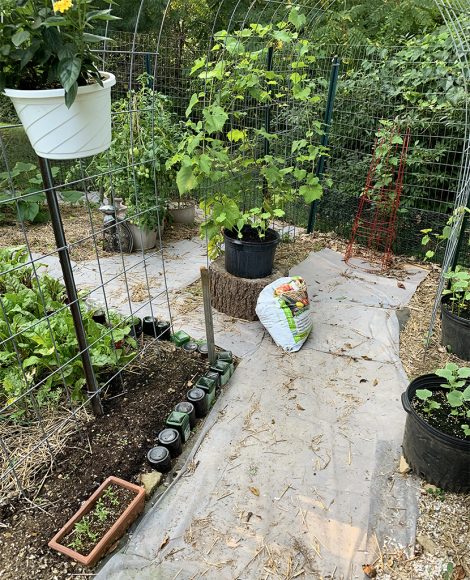 A portion of the Black Walnut Kill Zone in my garden. Tomatoes and cucumbers grew in pots. Greens did okay; the grape vines have struggled for years.

Asparagus. Juglone won’t necessarily kill your asparagus, but, you won’t be picking but a handful of spears from a Black Walnut Kill Zone. Take it from me, if there’s a black walnut anywhere in the vicinity of your pitiful asparagus patch, do not attempt convincing yourself it’s not getting enough sun or the soil is too acidic or your compost was defective, or whatever. The problem is the walnut tree.

Eggplant. I don’t really do eggplant, but last year did stick a few transplants into the ground within the kill zone. They didn’t die outright but failed to thrive, and, produced nothing at all. At the time, I attribued this result to flea beetles, but my next door neighbor grew perfectly wonderful eggplants, flea beetles be damned.

Peppers. I can’t really comment on peppers. I don’t recall planting them in the kill zone, but, regardless, peppers only grow really well for me in pots on my front stoop where I can frequently pet and encourage them.

Beans. “Now wait a minute,” you might protest, “beans aren’t on the list!” Ah, very true, and many pundits will go so far as to proclaim bush beans immune to the impacts of juglone, rather than just leaving them off the no-go list. I can assure you, however, that bush beans aren’t a safe bet. Finally realizing I had a walnut problem this year, I planted a big patch of  Burpee Stringless Green Beans where I’d removed half my asparagus patch. The beans looked great at first, but, right as the flowers were opening, the leaves wilted, yellowed, and began falling off. The poor things looked exactly like my dearly departed Bush Early Girls. Three feet away a patch of Cantare Green Beans was perking along quite happily and pumped out beans through late September. So, at least in my garden, the impact of juglone on beans is variety specific. 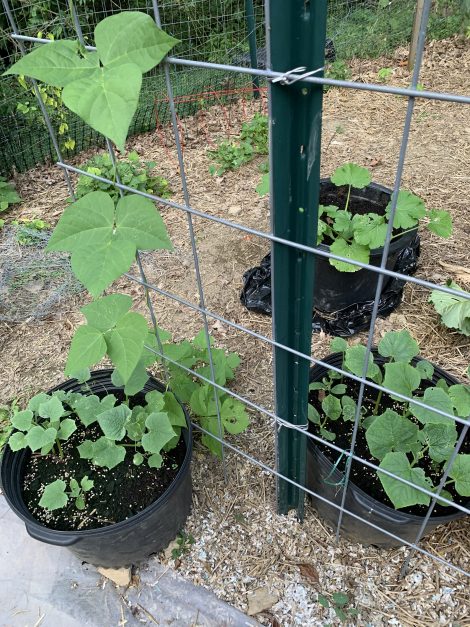 Cucumbers growing in pots within the Kill Zone of the black walnut tree.

Cucumbers. Cucumbers are also not on MSU’s list, but are a definite “no” in my particular kill zone. The seeds do germinate and, if protected from the birds, do produce seedlings, but, the plants don’t grow beyond a few inches in height. Compost and fertilizer do nothing to push them along. In an unscientific test, I planted three varieties of cucumbers in nursery pots within the kill zone and they’re doing quite well. I have high hopes regarding a late season cucumber harvest. (Update: my late season potted cucumber vines did, in fact, produce a basket of cucumbers before the weather turned to autumn.)

How Close is Too Close to a Black Walnut Tree?

Some sources suggest siting your garden one hundred feet away from a walnut tree. Others prescribe a distance equal to the height of the tree. Since trees grow, this second bit of advice is going to have you backing your garden slowly away from danger, year after year after year. I personally can’t live with that level of strees, and would suggest it best to stay at least a hundred feet away if you’re not going to remove the tree.

Remove the tree? Don’t the roots keep pumping out juglone as they decompose?

In researching black walnut, I did, in fact, become initially dispondent over the perception that I was screwed. Even if I were to kill the tree in question, its decomposing roots would apparently pump out poison for years and years and years. The best advice I could find suggested picking up my garden and moving it, or planting lots and lots of greens, scallions, garlic, and summer squash.

“Not so fast,” opined Iowa State Extension,  “juglone breaks down in a matter of months.” According to this source (an extension agent with a forestry degree), juglone toxicity, in general, is degraded in two to four weeks. Soil can be clear of toxin within two months of tree removal. Further, walnut leaves and wood chips can be composted and used around even senstive plants if left to ripen for at least six months.

With this ticket to juglone freedom in my pocket, I set about murdering the murderer in my yard.

Murder! How does one kill a walnut tree?

Having just spent so.much.money having three huge white pines and a dying ash removed from my property, calling the tree guys to cut my forty-foot tall black walnut wasn’t an option. Since the walnut is in an area where falling branches wouldn’t be a concern, I decided to deaden it and allow it to break down naturally. After a ton of research, I resigned myself to using poison and chose a triclopyr herbicide. I generally use no herbicides on my property, but wanted to kill the roots of the tree as quickly as possible. Simply girdling the tree wasn’t going to accomplish that.

Several weeks elapsed before the leaves of the walnut began to yellow.

Triclopyr sprayed into a gash in the trunk of my tree, I was assured by several practicing foresters, would move into the roots and kill the entire tree without impacting surrounding trees or vegetation. I read and carefully followed the instructions on the label (which is required by law in the U.S.). Instead of a single gash, however, I used a small hatchet to make cuts all around the trunk, down low near the roots. I was careful not to girdle the tree, however, as I wanted the chemical to move both up into the crown and down into the roots.

Although the weather was sweltering and I expected the tree to stress out and die quickly, it took its time, slowly yellowing before dropping its leaves over a span of six weeks. As of late October, it stands completely denuded and is already being used as a perch by the resident hawks, who do so enjoy a good view of the squirrel activity.

As of yet, I can’t tell you if the tree is completely dead or just badly stressed. So far, just the leaves have fallen. If truly dead, the small twigs and braches will begin to break off this winter. Even if the roots of the tree are already dead, it will be spring before I can plant a few sacrificial tomato plants in the Kill Zone to test the level of juglone in the soil. Come back again next summer for an update on my progress!