Lessons in Resiliency from a Hickory Tree 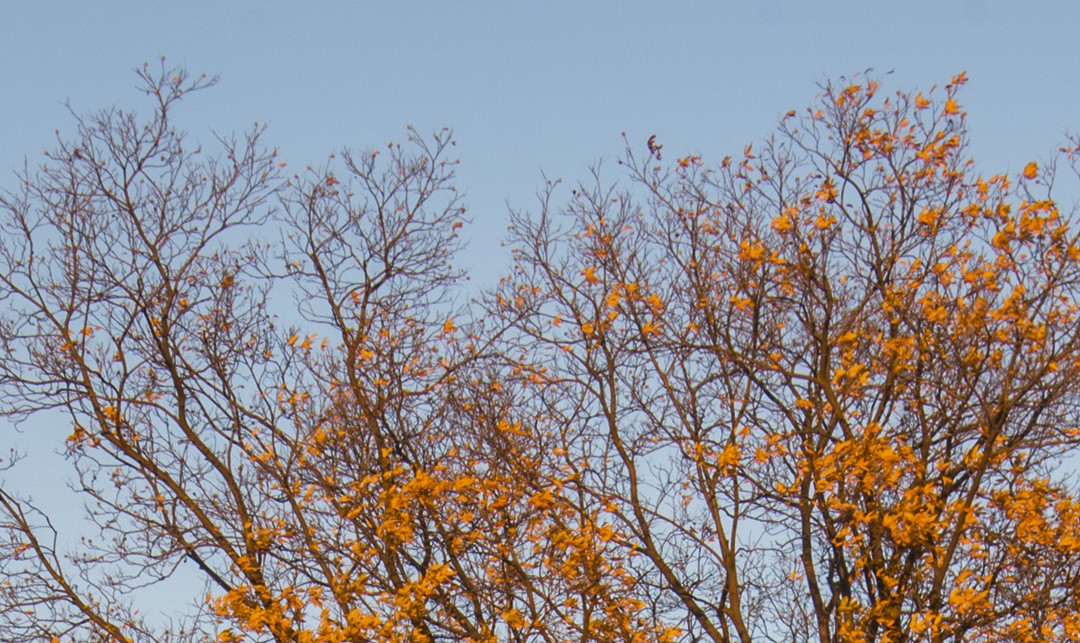 There’s a pignut hickory tree at the bottom of my property on Pleasant Hill that stands well over a hundred feet tall and spreads its majestic limbs across the sky outside my bedroom window.  Each autumn, this hickory produces a magnificent display of orangey golden leaves and a seemingly endless rain of sweet nuts for the squirrels and other rodents who have moved in since I first started wilding the yard 15 years ago.  To say that I love this tree, which technically is across the property line, and not mine, would be an understatement.  I adore this tree and everything it represents. 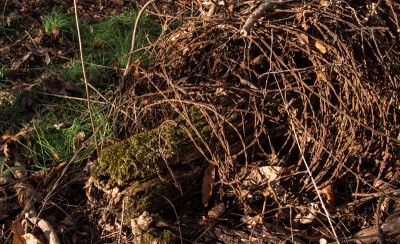 It grows between my property and the next in a straight line of old trees that took over a faded fence line.  A tightly wrapped burrito of rusty, pitted barbed wire can be found at the bottom of the property as a reminder that livestock at one time stayed on this side or that of the line thanks to the wire’s sturdy resolve.  As maintenance of the fence became neglected around the time of the Second World War, a rag-tag collection of trees took over.  The black locust and wild cherry likely came first, as both like the sun on their heads as they grow.  I imagine birds sitting on the old fence wire depositing pits after a meal of bitter wild cherries and black locust seeds being carried a short distance by wind or mammals to lodge in the unmown grass that had already crept up waist-high along the fence line.  As these pioneer trees grew and shaded out the grasses, the ancestor squirrels moved in with their black walnuts and hickory nuts to bury.  And when the locusts and cherries began to decline and decay, my hickory powerfully pushed its head up and above all the rest to establish dominion over first the fence row and then the manicured lawn that lapped at its feet as late as a decade ago.  That lawn is gone, shaded out by the crown of the hickory, and replaced by shade-tolerant wildflowers and singing tree frogs. 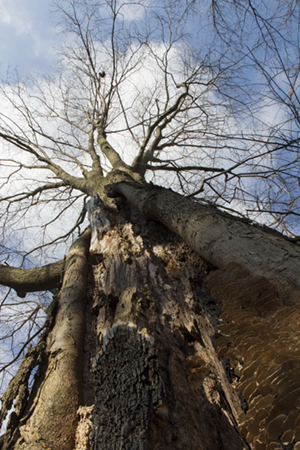 The fact that this glorious tree is not currently a snag or a stump is due to me.  I saved its life.  It has a scar at least 8 feet high to remind us both of the night when I rushed down to it, dragging several hundred feet of garden hose, cussing myself for not investigating sooner the scent of wood smoke that lingered in the air days after my neighbor burned a massive brush pile beneath the hickory’s boughs.  I had, just moments earlier, walked down the hill prepared to see the remains of the burn pile still smoldering, threatening to send sparks across the property line as the wind picked up.  Instead, I was mortified to find the moldering wood pile stacked close to the hickory’s base missing, burnt to embers, and the trunk of the tree on fire.

As I held the hose and poured gallon upon gallon of cold water on the screaming tree, steam boiled up from glowing embers that were once the tree’s tightly fitted protective jacket of bark.  I knew that the phloem located just under the bark, the lifeline of the roots as the conduit that brought them nutrients from the crown, were already destroyed on the burnt side of the tree.  I worried about the damage caused deeper within by the sustained heat of the slowly simmering fire.  And I felt intense guilt.  Why had I not wandered down the hill days ago when the brush pile was burning and sparks were flying?  I could have found the old wood pile on fire and knocked the fire down before it ever reached the hickory.

The tree, of course, was uninterested in my laments.  It was busy, as trees become when damaged, cordoning off the burned portion of its trunk in a process called compartmentalization, which involves throwing up chemical and mechanical walls to isolate injured heartwood.  This process, first understood in the 1970’s, is credited as the mechanism behind the longevity of trees.  You can see the process in action when you improperly prune a branch, leaving a short stub of truncated wood.  Within a year, the stub becomes deadwood jutting from the tree, evidence that it was walled off from nutrients and water.  Without compartmentalization, most trees would quickly succumb to fungal attack through even minor bark injuries.  With it, they can effectively isolate relatively major damage and keep on growing for years, decades, or even centuries.  My hickory has become even more glorious in the decade since it was damaged, in spite of the fact that woodpeckers now mine the insects inhabiting the blackened, punky wood of its fire scar.

So, what can we learn about emotional resiliency from this pignut hickory tree?  If you define resiliency as the ability to come back after adversity, trauma, or grief, a tree has much to teach.  First, the wise old hickory can once and for all bust the cliché assuring us that what doesn’t kill us makes us stronger.  The tree calls bull on that.  It really is weaker at the broken place; more susceptible to the effects of future trauma, and more likely to fall during a wind or ice storm.  But in spite of the 8-foot wedge of char, decay, and shelf fungi that dominates the south-facing aspect of its trunk, my hickory has grown taller and fuller each year.  Its crown spreads further and further in all directions to gather the rays of the Sun…up and out…up and out…up and out…with so much vigor that you can feel the jubilation and joy coursing through the uplifted boughs.  As the tree grows, though, the wound does not.  Each year, it becomes smaller in proportion to the size of the tree and seemingly less significant.

How, then, can the life of this tree serve as a metaphor for human healing?  Is there an equivalent compartmentalization tactic for humans that allows us to wall off wounding and keep on growing?  (And “keep on growing” is the key here).  There is avoidance for us…just turning off the memory or walling off the emotions it carries.  It’s an effective means of putting barriers up around a wound but, unlike in a tree, this type of barrier has a tendency to stunt our growth, making us less trusting, less child-like, and less able to see the world with a sense of joy and as a place of limitless potential.  We may “grow up”, thanks to emotional compartmentalization, and become harder, colder, inflexible, and insulated from new emotions, which we shove behind the wall with the old.   Or, we may “melt down” and become anxious, confused, and ruled by the emotions that sit unacknowledged behind the barrier we erected, no longer able to access or understand them.  At either extreme, our lives become smaller than they were meant to be.  Going back to the metaphor of the tree, instead of continuing to grow gloriously, imagine the hickory becoming so rigid and brittle after the fire that it snapped outright the next time the breeze kicked up…or so afraid of further wounding that it became stunted and stopped reaching up to the sky.

It’s not really the art of compartmentalization, but the tactical management of energy that holds the lesson useful to the human heart.  Once the flames were out, my hickory directed considerable energy toward the damaged portion of its trunk as vessels were plugged and new tissues were produced around the burn.  But after that work was done, the energy shifted.  Specifically, things veered back towards…..normal.  The tree was forever changed, but the hickory didn’t sink into the wound and get stuck there.  No, not at all.  The wise old hickory continued to pull energy up from the Earth and down from the Sun and the Sky, working around the wounded section of the trunk.  Slowly, the damaged part withered and died and became something that was.  And the tree continued on…budding out hopefully each spring, spreading its leaves to capture the summer sun, dropping nuts like hail each autumn, and etching the winter sky with its sturdy twigs.  A tree has no need to worry about a further wound or what might happen down the path…the hickory is forever changed, but it is no less.

So, think like my hickory the next time you’re wounded…turn your focus to the broken part and put your energies there.  Feel every bit of pain.  And then, when you are ready, stop feeding the broken place.  Let the pain die slowly of its own accord as you push down your roots and stretch your crown up to the sky, reaching again in joy and jubilation.  Unleash your energy to flow, baby, flow, flow, flow, around the broken bit.  Grow on.  Forever different, but still so beautiful, so strong, and so magnificent. 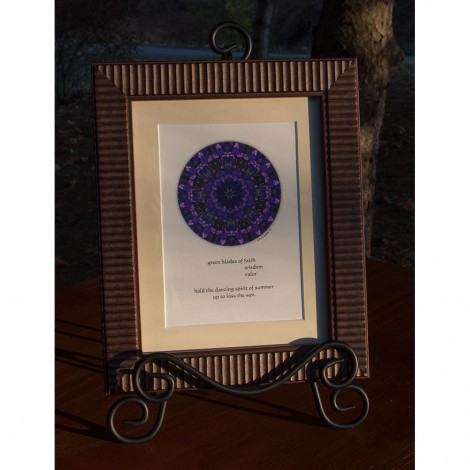 I create mandalas from single photographs. My art and my writing often criss-cross, sharing similar themes and inspiration. 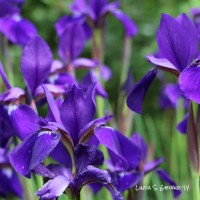 The mass of Siberian iris that inspired this piece, Purple Iris Pinwheel, blooms in all its glory each May at the end of my driveway. The iris gets more spectacular each year as the clump of blade-shaped leaves expands, sending up more and more beautiful purple blooms.

Iris is a very special and revered flower. Almost every culture acknowledges the special attributes of this plant. The leaf is said to be the blade that entered Mother Mary’s heart at the Crucifixion of Christ. The leaves are also associated with a trifecta of  positive human attributes:  faith, wisdom, and valor. In Chinese tradition, the flowers are celebrated as the “dancing spirit of summer”.

Once I learned of the association with the heart wound of Mother Mary, I began seeing iris differently–they began to symbolize, like my burned hickory tree, our ability to continue to shine out our beauty even after a devastating hurt.  I hope to convey this with both my mandala and my poetry…green blades of faith, wisdom, valor…hold the dancing spirit of summer up to kiss the sun.