Episode 1 ~ I Was Going to Write About Trees 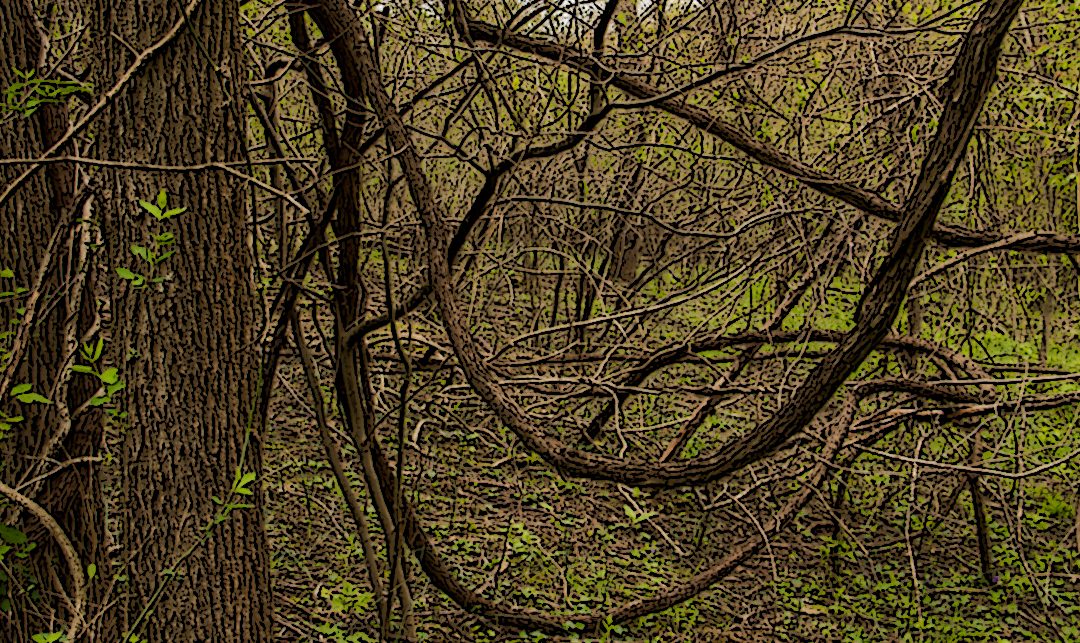 At First, Hawk Could Only March in a Straight Line

I began writing Giving Voice to Dawn in March of 2015. My swirling story of Spirit Animals, goofy guides, and life purpose revealed began as a tight march through the notion of forests as analogs of human behavior. I started out with an essay on vines. My premise was that roguish vines have a rank tendency to scramble up the trunks of stately, admirable trees so as to get their heads above the leafy fray while expending minimal energy. You know…because everyone wants the sun on their face but few want to work hard for the experience. The only problem with the strategy, of course, is that the vines eventually pull the trees to the ground. With a crash. And a splintering of dead wood.

The end result of the “Vine Strategy”, as I’m sure I would have eventually christened it, is a chaotic scrum suspended just a few feet off the ground. And who wants to be suspended a few feet off the ground in a wild tangle of humanity? I was probably going to wrap up my essay with a treatise on the benefits of supporting tall human trees instead of climbing their backs and pulling them to the ground, but I didn’t get that far.

Andy looked up from the page. “Naw, this isn’t you.”

A latex balloon wearing my face inflated in my mind’s eye. Tethered on a string, the balloon bobbed and ducked in an unseen breeze as my cheeks and forehead expanded to near bursting. I looked bloated and full of myself. To my horror, my fat balloon lips parted to expel a gale of analytical wind. I cringed. “Well, no. I mean, other people expect that from me, but that’s not what I want.”

“Right, so stop writing like this. This reads like a status report. You don’t write status reports anymore. Do you?”

I grabbed a rusty ice pick and plunged it into my balloon self’s left temple. The air rushed out of my head in a sputter of flapping latex. The deflated balloon flopped down to dangle from the end of the string. I cocked my head to the left and brought my brows together. Someone appeared to be holding the string. The soft suggestion of slender fingers with closely trimmed nails coalesced and then faded away. I let the image go and focused on Andy. “No, you’re right. I don’t write status reports anymore.”

“Then forget this preachy-ass shit and write something fun.” Andy held my essay out between a forefinger and thumb. He gave the page a few derisive shakes and my words tumbled off the paper to the floor. My finely crafted dissertation with its neatly typed headings and carefully constructed arguments now lay in a sad jumble at my feet. I nudged the pile of prose with my toe, scattering the bits and pieces of my essay, which found their legs and scurried off like a hoard of spiders kicked loose from its nest.

(Continue your read here… Episode 2 ~ When Lost in the Weeds, Ask the Pathfinder)

A Small Gift for You

I created a sweet PDF of the first 30 pages of Giving Voice to Dawn that you can download for free. It includes two poems, a bunch of illustrations, intros to the main characters, and the complete Parable of Pamela the Donkey—A Story of Life Purpose Stuck at the Bottom of a Hole, so really is a gift and not just a teaser that leaves you completely up in the air. Just click and read. → Click Here to Download Your Free Sample of "Giving Voice to Dawn" (712 downloads)