Episode 5 ~ You Don’t Always Have to Hold the Reins 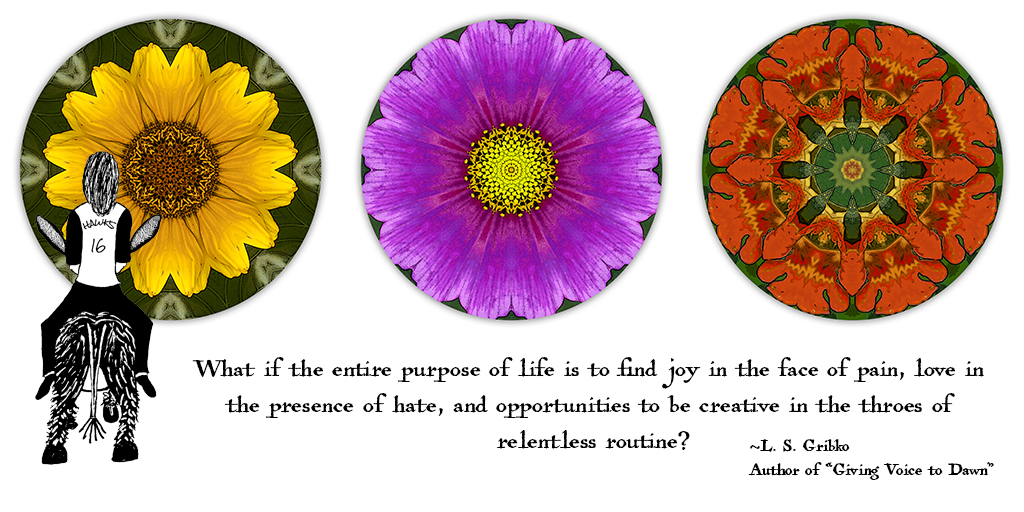 This episode is dedicated to Stephen Cassle, who passed over on June 15, 2017. I didn’t know Steve well, but he clearly lived within the magical embrace of “Joy and Love and Creativity”—it hung on him like a cloak that he enthusiastically wrapped around other artists, including me. Steve was the person who discovered my mandala art and helped me get it ready to be juried at Tamarack, a large gallery and retail space that shares “the best of West Virginia” with the world. He did the same for scores of artists over the years and seemed to have boundless energy for helping others. Steve was also a damn, fine living historian and did a powerful Stonewall Jackson impersonation that was the inspiration for Old Jack’s appearance in Giving Voice to Dawn. I’m glad to have known you, Steve, and do hope I’ll bump into you every now and again on the other side of the river.

My brother, Andy, glanced at me over the top bun of the pit beef sandwich he held just inches from his lips. He paused for just a beat, dropped his eyes back to the confection before him, and sunk his teeth through layers of bread and tender beef. An expression of peaceful nirvana washed over his features as he closed his eyes and chewed. “Mmmmmmmm.” As I waited for Andy to swallow, I fiddled with the French fries on my plate—lining them up in an organized rank of soldiers ready to march into battle. “Gomphs?”

I looked up at Andy. His right cheek was bulging with the mouthful he’d pushed aside so he could speak. “No, not ghosts. Something with Neil. No, okay, maybe not Neil…something with me. I got off my donkey and I think I was riding his.”

Andy swallowed and gulped down a long swig of iced tea. “Aaaaaaaaaaaa, that’s good eats. You going to eat those fries or play with them?”

“Oh my god, Andy, you just channeled Dad.” I plucked a fry from the regiment I’d organized and bit it in half. The crisp, brown exterior gave way to a fluffy, potato experience unmatched by any fast food chain. “These are the best damn fries on the planet.”

“Exactly. Don’t let them get cold.”

For the next fifteen minutes, Andy and I ate our sandwiches and fries in comfortable silence. By the time he wadded up his napkins and dropped them on his plate, I’d completely forgotten the conversation I’d started. “So, what’s wrong with that?” Andy asked.

“Nothing! It’s great…the best pit beef in the area…if not the entire country…or the world.” I pushed back my plate and carefully swept my crumbs off the table and into my other palm.

“I meant the donkey riding. You on Neil’s beast. What’s wrong with that?”

I knocked the crumbs off my palm and onto my plate. “Oh, that. I should be doing my own thing—exploring my own path and writing. But, there I was, following Neil around Gettysburg taking the pictures he wanted. I didn’t shoot a single photo that I thought might be nice and I never once went off on my own to write.”

“Well, maybe you’re overthinking things. Did you have a good time?”

“Well, what if the entire purpose of life is to find joy in the face of pain, love in the presence of hate, and opportunities to be creative in the throes of relentless routine? What if that’s all there is to it?”

“Where’d that come from?”

“I’ve been working on it for a while. You like?”

“Well, apply it to your trip…did you find joy?” 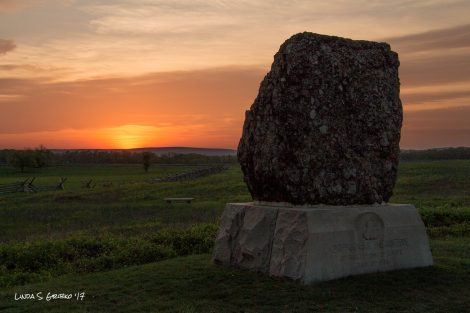 Monument to the 20th Massachusetts Regiment at Gettysburg. The boulder is a piece of home that was brought to the battlefield as a reminder of the landscape on which the Massachusetts soldiers had played as boys.

“Uh-huh, I did. I found joy everywhere. The birds were singing, the battlefield was gorgeous at dawn, the sunsets from Cemetery Ridge were incredible, there were wildflowers, I saw the most beautiful hawk swooping over Devil’s Den, and, of course, I was happy just to be spending time with Neil.” I felt my cheeks warm up a few degrees and hoped they weren’t bright pink. I wasn’t in the mood to be teased about my slowly evolving relationship with Neil. Fortunately, Andy stayed on point.

“All in spite of the underlying pain of the place, right?”

“And love was clearly in the air based on the color of your face right now.” Andy reached across the table and pinched my left cheek as I scowled at the ceiling. “So, that leaves ‘creativity’ all alone on the table. Do anything creative last weekend that broke up the monotony of life?”

I pushed Andy’s hand away from my face. “Yes, I worked my butt off creating original photos for Neil’s workbook. As photographed as those monuments are, trying to find unique angles definitely pushed my creativity.”

“No, not complaining. I just said it was strange. We started out the weekend riding side-by-side…I was seeing through my own eyes, having my own experience…but, it hit me Sunday night that Neil’s experience had taken over…I was seeing the battlefield from his perspective, not my own. I couldn’t remember getting off my donkey, but there I was on the back of his.”

“And you’re worried you might put aside your own dreams again to work in support of someone else’s?”

“I wouldn’t worry too much about that.”

Andy pushed back from the table and gathered up our trash, signaling that lunch was over. “Because it would be nigh-near impossible for you to fall that deeply asleep again.”

I slid off my chair and followed Andy to the trashcan. “You think?” I pushed the flap on the receptacle open and held it as Andy dropped in our paper plates, napkins, and drink cups.

“Yeah, and anyway…,” Andy said as he turned toward the exit and put his arm around me, “…I’d kick your ass if I caught you napping.”

A Small Gift for You

I created a sweet PDF of the first 30 pages of Giving Voice to Dawn that you can download for free. It includes two poems, a bunch of illustrations, intros to the main characters, and the complete Tale of Pamela the Donkey—A Story of Life Purpose Stuck at the Bottom of a Hole, so really is a gift and not just a teaser that leaves you completely up in the air. Just click and read. → Click Here to Download Your Free Sample of "Giving Voice to Dawn" (716 downloads)