Through My Heart and Lens 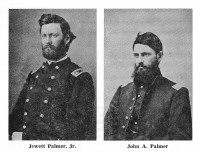 I began to visit Antietam National Battlefield near Sharpsburg, Maryland, frequently once I learned that my ancestor, 1st Lieutenant John Alexander Palmer, who came from a strongly abolitionist family, fought there with the 36th Ohio Volunteer Infantry. At the time of the battle, the 36th Ohio was attached, with the 11th and 28th Ohio Regiments, to the 9th Corps of the Army of the Potomac in George Crook’s Brigade of the Kanawha Division. Although I began my exploration of Antietam in hopes of merely tracing John’s steps across the southern end of the battlefield (including Burnside Bridge), my scope quickly expanded to include parts of the battlefield that the 36th Ohio never saw on the day of battle:  the Dunker Church, woodlots, and fields to the north, and Bloody Lane, the Roulette Farm, and the rolling fields in the center.

My visits became more poignant and melancholy once I learned that John had contracted typhus on the day of the battle, September 17, 1862, and lay with his regiment near Antietam Creek for most of the night in a steady rain without the benefit of shelter or even a blanket. John survived the battle, but it would be his last. He became quite ill and was forced to resign his commission in January 1863 due to continuing ill health. John Palmer died back home in Lower Salem near Marietta, Ohio, of typhus in March 1863. His younger brother, Jewett, was Captain of Company G at the time of the Antietam Battle but wasn’t with the regiment that day due to illness. Jewett rejoined the regiment later that autumn and fought in the Battles of Chickamauga and Missionary Ridge in 1863 and then served in the 1864 Valley Campaign, through the Battle of Cedar Creek, before also resigning due to ill health in November 1864.

I offer these photographs in honor of John Alexander Palmer, Major Jewett Palmer, Jr., Colonel Melvin Clarke (killed during the Battle of Antietam in the ravine near the Otto House), and all the boys of the 36th Ohio who fought for both the preservation of Union and the abolition of slavery. 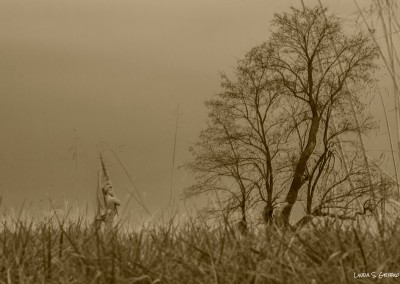 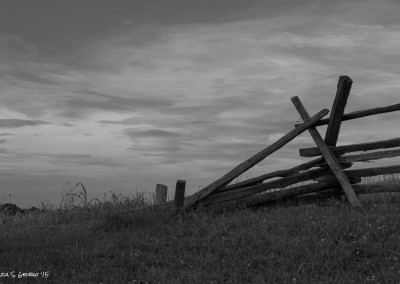 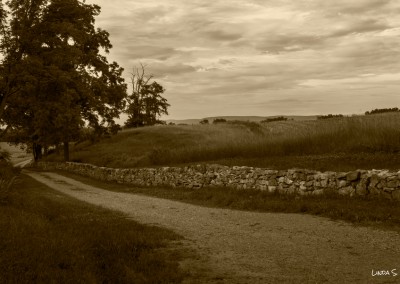 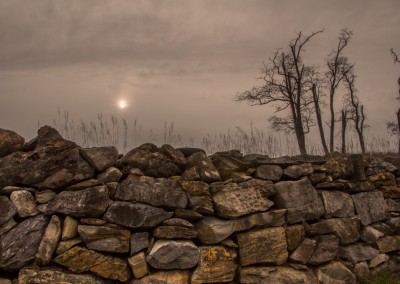 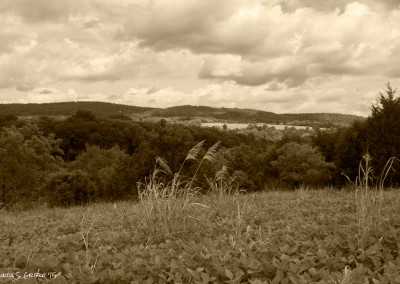 The men of the 36th watched the artillery duel going on across the valley on the night of September 16 from the ridge highlighted by the sun in the background. The ravine through which Antietam Creek flows is in the mid-ground. 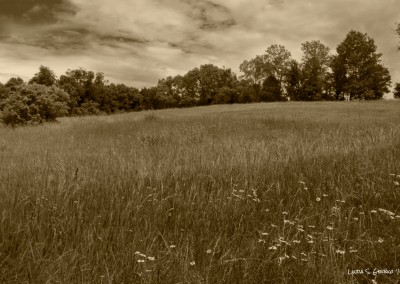 The 36th moved from the ridge to the orchard around the Henry Rohrbach House (Burnside’s HQ) by late morning on September 17. The 36th crossed ground in this vicinity later in the day on their way west toward the bridge. 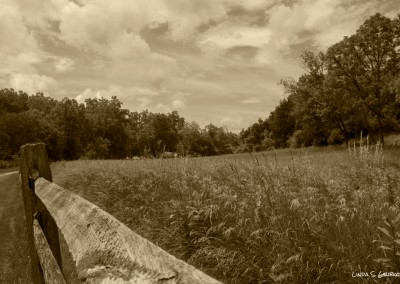 Burnside Bridge is just visible in the treeline. The 36th either approached the bridge along this road trace by swinging south and then back north or came straight down off the hill to the right. 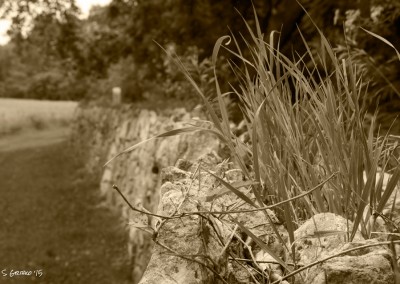 Hundreds of Union soldiers were killed and wounded along this stone wall east of Antietam Creek where grass now grows. 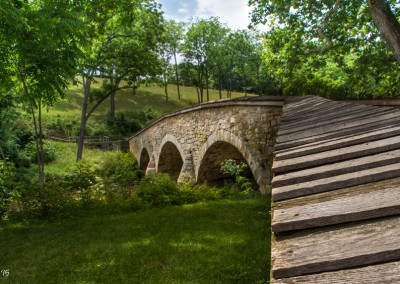 The 36th Ohio had been chosen to assault the bridge but ended up last across, though still under heavy artillery fire. 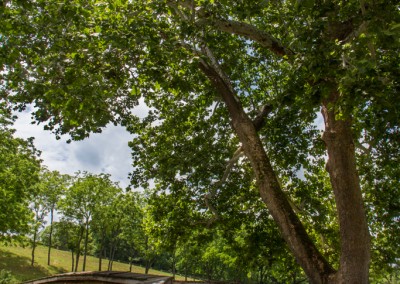 Soldiers of the 36th streamed by this same sycamore in 1862. 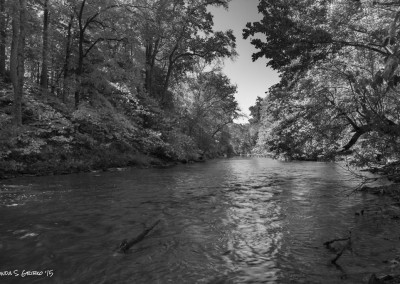 Rodman’s Division, deployed to the left of the 36th Ohio and the rest of the Kanawha Division, had difficulty fording the creek. 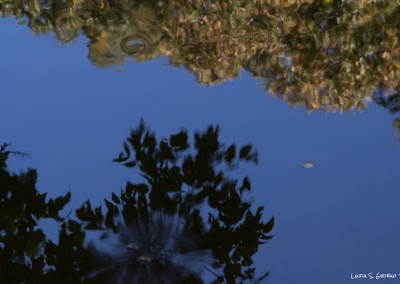 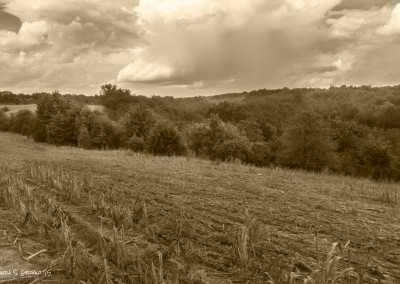 Out of the Ravine and Into the Fire

Once over the bridge, the 36th Ohio climbed the steep slope west of Antietam Creek and emerged on this high ground in the late afternoon of September 17. 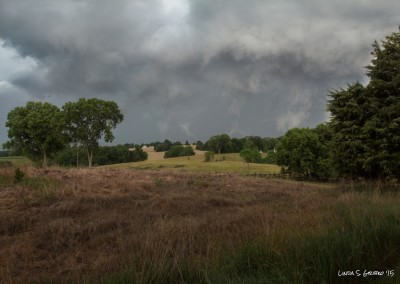 Violent Storm in the South

The 36th advanced over slightly rolling ground to the right, hidden by the trees in this view. Monuments to the 48th PA, Durell’s Battery, and the 23rd Ohio, which all deployed south of the 36th, are in the distance. 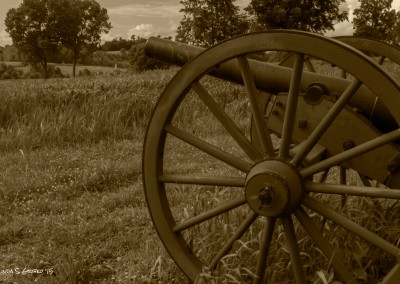 The 9th Corps was supported by the guns of Clark’s and Durell’s batteries on high ground east of Otto Lane. In the distance, the monument to the 36th Ohio is visible at the point of their farthest advance. 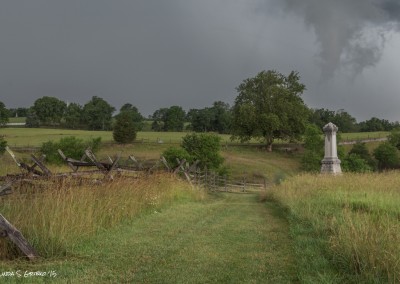 Into the Otto Lane Ravine

The 36th Ohio was deployed to the right of this position, facing the stone wall visible on the far side of the ravine. The monument is to the 11th Ohio. 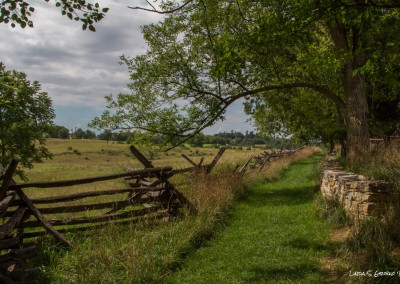 South of the 36th’s position, the terrain left Union troops exposed to artillery and musketry fire. The First Brigade of the Kanawha Division (the 12th, 23rd, and 30th Ohio) was deployed across this field, which was plowed at the time of battle. 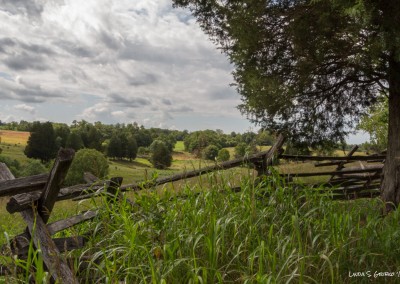 Even further south, Harland’s largely rookie New England brigade was flanked by A.P. Hill’s Confederate Division in this area, which was in tall corn at the time of the battle.

By the time the left flank of the 36th reached this exposed location behind the Otto house and barn, A.P. Hill’s Division was fully engaged on the south end of the field and most of Willcox’s Union Division was swarming back past the 36th in retreat. Rodman’s Division, including Harland’s Brigade also had been driven back. Under heavy artillery fire, the 36th scrambled into the ravine below this point. 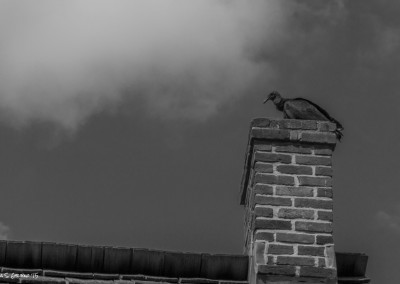 The 36th Ohio lay down in battle line in the ravine by the Otto House before charging the slope and taking the high ground where their monument stands. Colonel Clarke was killed near here as he was ordering his men to the ground. 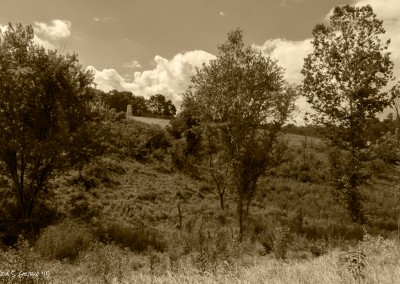 Final Charge of the 36th

With their backs now to the Otto house, barn, and orchard, the 36th Ohio charged this slope and reached the stone wall marked by their monument. 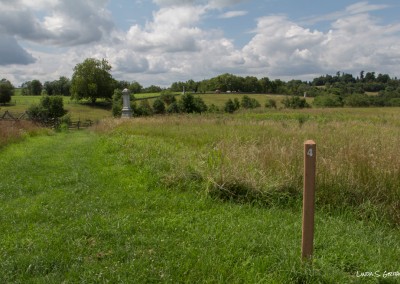 The monuments to the 11th, 28th, and 36th Ohio visible here left to right indicate the farthest advance of Crook’s Brigade at Antietam. The arrival of A.P. Hill’s Division and the lack of Union reinforcements forced Crook’s men to eventually retreat. 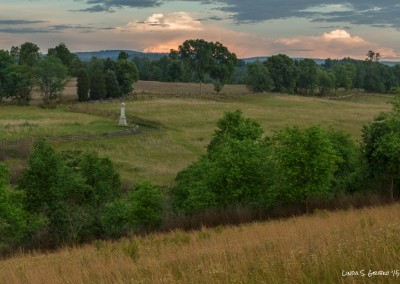 The 36th Ohio was deployed to the left in this view and charged up the hill to this position. The monument to the 11th Ohio stands along Otto Lane. 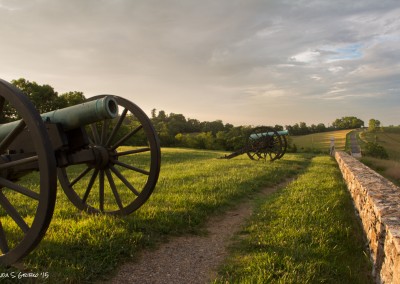 Confederate guns at the top of the ravine fired down into the Union ranks as they approached across the fields. The monument to the 36th Ohio is visible at the end of the stone wall.