A Song in Praise of Patio Choice Yellow Tomatoes 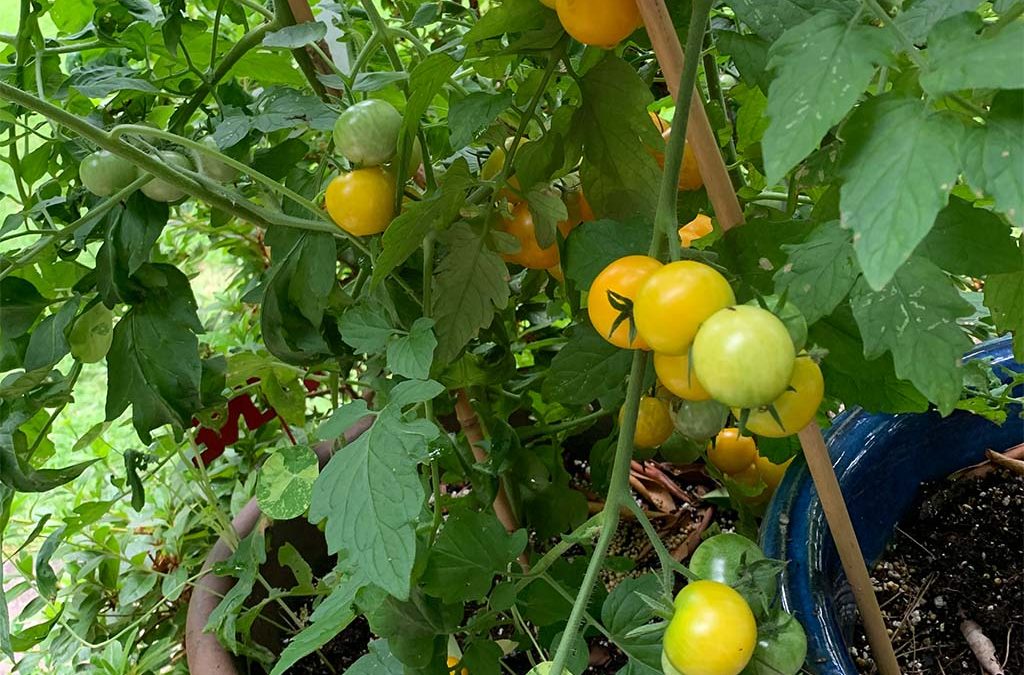 This is a song in praise of the Patio Choice Yellow Tomato. Should you have time to read only one additional sentence today, make it this one —> Patio Choice Yellow is compact, apparently vaccinated against all known tomato maladies, and capable of producing fabulously uniform and tasty yellow orbs of goodness from mid-July to frost in my Zone 6 garden.

This is my second year growing Patio Choice Yellows. Last year (2021) was a bad, bad year in this area (north-central West Virginia in the western foothills of the Allegheny Range of the Appalachian Mountains) for Septoria Leaf Spot, caused by the fungus Septoria lycopersici. I started an assortment of nearly two dozen tomato varieties in 2021 and, within a week of setting them out, had Septoria spots on most of my seedlings. Several varieties (including Gold Medal and Chef’s Choice Yellow) gave up quickly, refusing to overcome. The varieties that survived the unusually early onslaught of fungus were, due to my removal of affected leaves, very nearly bald by mid-August and done producing fruit before the end of the month. The only varieties to avoid this sad outcome were Patio Choice Yellow, which was completely spot-free!, and Gardener’s Choice Red Cherry (AKA Sugar Lump), which had some spots and lost some leaves, but maintained its vigor and production.

This year (2022), I started a few dozen Patio Choice Yellows, sold the majority to special customers, and ended up with three for myself. Two are in pots on my south-facing concrete front stoop, prime real estate for patio tomatoes. Both vines are vigorous and producing scads of tomatoes, while showing no signs of the Septoria affecting a different patio variety planted right next to them. Alas, I accidentally planted the third Patio Yellow in a Black Walnut Brownfield without a hazmat suit!!! The poor thing had grown up and over its three-foot cage before finally sucking enough juglone from the soil to show ill effects, namely the strange wilting of half the plant from soil line to tip. I dug it up, planted it in a 5-gallon nursery pot and hauled it up to the deck. After a few weeks in a shaded location, the plant bounced right back and is not only pumping out tomatoes, but is, as shown here, providing Phoebe a bit of shade. 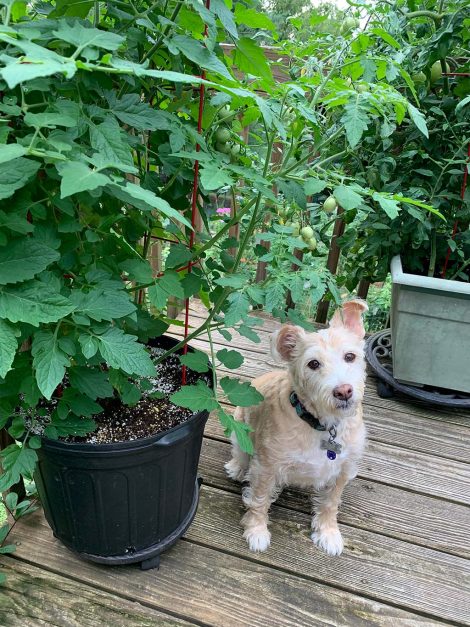 Phoebe, the Jack-a-Poo, posing next to the Patio Choice Yellow tomato plant saved from the toxic Black Walnut Zone.

I hardily recommend Patio Choice Yellow Tomato. I can conjure up not a single qualm to share. Just do realize that your plants will very likely be at least twice as big as advertized, and will require some support. Plant them in the ground or grow them in a pot, they’re fine with either; and, if you’re local to Morgantown, West Virginia, check back next spring when I’m sure to have some seedlings available.